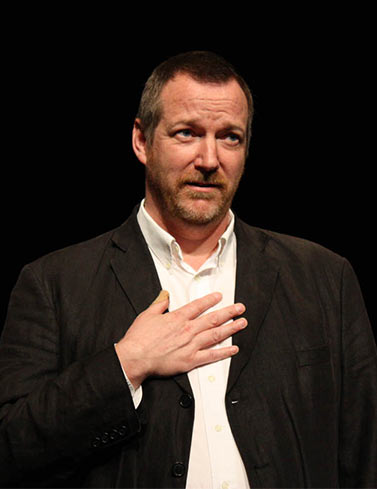 I have worked as a performer, designer, deviser, director, writer for: Clanjamfrie (Scotland), Collectif Organum (France), Theatre of Public Works (England); was a founding member of Pants Performance Association, and for the past 25 years has been collaborating with Jules Dorey Richmond.  I have also worked in film, in particular with Daniel Reeves (USA) and worked with the European Council running workshops with young men as a means to prevent violence in everyday life.

Terrorists of the heart is a duet by my long term collaboration with Jules Dorey Richmond. It is a meditation on parenthood, ageing, grief and loss, as well as a political manifesto with some Morris dancing, performed:

In association with The Sunday Lunch Club at The Lawrence Batley Theatre - Huddersfield;

In association with Oui performance at Space 109 in York;

Performance Recall Festival at the Arches Theatre Glasgow in spring 2011;

The Cultures of Memory Conference at YSJU October 2013.

It has been said that collaboration is ‘an affair of the mind’, for myself & Jules it has been rather more, as we are not only artistic partners but also married and parents. We assert that, working collaboratively, our work is constantly shifting and developing in ways that, as individual artists, we could never have envisaged or achieved alone. Our long-term collaboration takes our performance work into new and diverse territory; having performed in theatres, galleries, clubs, streets, quarries and rivers throughout the UK, Europe and parts of the Far East and the USA.

Whatever else our work might be concerned with, at its core is human beings interacting in the here and the now. Our work evidences interest in questions of how we represent ourselves in performance and even more importantly how we represent others in performance. We investigate where personal and cultural memories collide, creating performances that flow from the small and almost insignificant to the grand and overpowering.

Terrorists of the heart was a tender manifesto for our relationship both as artists and family. It was at times comic…mostly though it was moving in its honesty. And it was incredibly inspiring to see something that exemplified the work we all do on the degree. On my way out I heard someone comment, “…well now I get why we’re learning this” and I saw that she was crying.

Slipping Away is inspired by a lost photograph. A photograph that I am not sure exists any more, which I have searched for but cannot find. A photograph of me, aged 7, standing on a beach with my Tarzan trunks pulled down around my ankles.

So without the photograph, all I have is words, litanies, repetitions, agonies of words.

Words with myself, as I am now, taking the place of me as I was then. Or as I remember as it was then. I will then have another memory of the event, a memory of creating the event – or rather of recreating the photograph… or are they the same thing?

On a beach on the west coast of Scotland nearly 80 years ago today my Uncle was washed up dead.

In a hospital in London nearly 30 years ago today my Dad took his last in breath.

Slipping Away is a performance as an event that calls upon witnesses, seeks to bare testimony and itself constructs memories.

In an attempt to answer 'How can you bear testimony to an event you did not witness?', I developed the Level 2 module Artist as Witness to evoke a pedagogic model of how to liberate the creativity of student participants within a non-fixed, fluid, ruptured landscape. The project sat alongside, and was interconnected with my postgraduate work into memory, place and performance.

This project aimed to engage students in a three year performance research programme examining the effect of the Shoah as an epistemic breach in the ‘story’ of culture. Specific emphasis was placed on representation, creativity, composition, performance, documentation and collaboration.

In each year of the project, I continue to take a group of Level 6 students to Poland for a five day study visit. The group spend an eight hour day at Auschwitz and Birkenau, in addition to a walking tour of Kazimerz, the site of the Jewish community pre-Hitlerzeit and the Kantor Museum.

On their return to York, the students spend a 14 week semester working to reflect on the cultural, political and aesthetic repercussions of the events, and then create a performance which reflects the times we live in.

For the past 15 years I have been collaborating with Jules Dorey Richmond creating experimental and innovative works, pulling together their respective disciplines of visual art and theatre. Since 1996 we have been engaged in a Theatre of Witness series of collaborative works with World War Two Veterans, Survivors and Witnesses in various communities throughout Britain. This process is ongoing and led them on a secular pilgrimage to Auschwitz.

We have been funded by the Scottish Arts Council and Glasgow City Council and obtained commissions from Mayfest & CCA, as well as receiving support in kind from the British Council.

"The discussion around your proposal highlighted the belief that your work is of the highest quality and integrity. All the Panel members who knew your previous work felt that your process of creation acts as a model of good practice for collaborative projects".
Scottish Arts Council

1997 Safe House, a site-specific event in a cellar of a house in Glasgow. Supported by the British Council.

1997 Armistice, an action in Central Station, Glasgow at 11am on 11th November.

1996 Resolutions This was a performance / installation, with a fire sculpture, a magic act, acts of self-renewal, scenes from "Who's afraid of Virginia Woolf?" dancing on tables, chocolate cake, cigarettes and scotch. A CCA commission.

1992 The Dispossessed. Fuelled by the Gulf War this piece explored the role of women in conflict. A Mayfest commission, which toured community venues throughout the Strathclyde region and Tramway.

1994 Spam - In residency at Crewe & Alsager College (MMU) and Chapter Arts (Cardiff ) developed and performed the last reincarnation of Spam.

1992 Spam - Co-commissioned by CCA (Glasgow) and Arnolfini (Bristol). Performed at BAC, The Green Room and Dartington Arts. Pants received the Barclays New Stages Award for Experimental British Theatre, and were part of the Royal Court Festival.

1995 Flow Nightclub - a site-specific performance in a club. A commissioned event for the International Architecture Winter school .

1992 The World's Edge. A critically acclaimed multi-media site-specific piece, created in a derelict boiler house, commissioned by Tramway & Mayfest.
Daniel Reeves is an internationally acclaimed video artist. He has received three Emmy Awards, has been a Guggenheim Fellow in Video Art and was a recipient of the prestigious Rockerfeller Inter-Cultural Film and Video Fellowship.

1998 Perdu. A feature film in development, Perdu being the central character played by myself. The film is a contemplation on Daniel's experiences in Vietnam during the war. Shot on location in Southern France.

1997 One with Everything. I play a Buddhist monk and the lead role in this comedy short for Channel 4, playing all the characters in this 30-minute film. Seen at the Berlin, Lisbon, Liverpool, San Francisco, Utrecht, London, Charlottesville, Washington and Rotterdam Film Festivals.

The Cultures of Memory Symposium 16th – 20th October 2013. A paper entitled Talking Back the Y(t)ears by Jules Dorey Richmond & David Richmond, on their theatre of witness work, with particular reference to cultural trauma of the Shoah. The Symposium is a collaboration between Syracuse University (USA), Massey University (NZ) & York St John University (UK).

YSJU Conference roaring
April 2009 enquiry based learning (EBL) an interactive performance the pedagogue of improvisation and the improvisation of pedagogue. In collaboration with students and academics from dance, music and critical studies.

Juniata College Pennsylvania USA
August 2008 as part of staff exchange in collaboration with Beth Cassani (dance artist and lecturer) worked with Students at Juniata on an ensemble performance.

Faculty of Arts YSJU Research Conference
September 2007 - Yorkshire Sculpture Park.
Collaborative paper with Jules Dorey Richmond how will we
remember when all the witnesses are gone.

Association of Art Historians (AAH)
33rd annual International conference AAH – Contestations – Belfast April 2007.
How will we remember when all the witnesses are gone? A Collaborative paper, with Jules Dorey Richmond, for the session - makers and making between trauma and cultural memory.