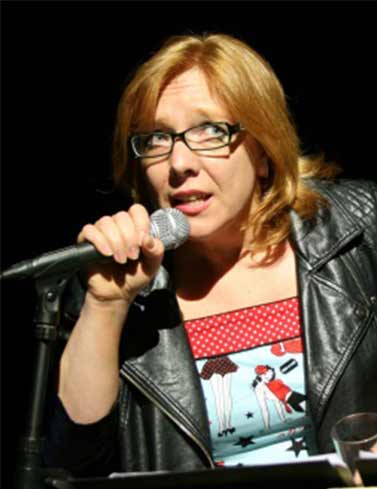 I have been teaching in HE for 20 years at De Montfort University, the University of Hull and York St John University. Currently, I investigate the relationship between writing, play and performance. My PhD conceived a number of named performance making strategies and my thesis investigated the theories and methodologies of conceptual performance making, rethinking psychoanalysis as material and drew significantly upon play theory.

I have senior supervisor status at PhD level, and can supervise projects relating to creative writing and performance, contemporary radio playwriting, theatre making, compositional strategies, walking and performance in the arts, intermedial arts, interdisciplinary practices, new dramaturgy and more. I also lead on the MA Theatre and Performance course at YSJU.


My international collaborative practice with Gary is intermedial in context and has high-impact public engagement value as evidenced in exhibitions, public performances and journal articles published in high quality peer reviewed journals. I have a forthcoming book publication written in collaboration with Gary Winters and through Palgrave MacMillan specifically focused on their diverse collaborations entitled: Embodying the Dead: Writing, Playing, Performing. My practice also boasts a research led teaching narrative where practice and critical reflection are an important focus of my HE engagements.

I also collaborate with Clare Qualmann of the University of East London. My work with Clare impacts significantly upon the walking artist network and beyond through their agenda on diversity, specifically bringing a writerly focus to the walking arts community where I developed the concept of the Wander Score. Through our collaboration on an AHRC funded research project spanning a 3-year period, we produced an artist book through Triarchy Press entitled Ways to Wander. This project has made international impact as a practice led example of dissemination which subsequently led to our latest edition of Ways to Wander the Gallery following an invitation to write and deliver education programs at Tate Modern London on walking arts and performance. I am regularly invited to international institutions as a guest teacher and mentor on UG and PG programs because of her practice led-research reputation.

As well as guest tutoring at the Norwegian Theatre Academy, The Federal University of Rio de Janeiro and the School of the Arts Institute Chicago, I have curated several conferences establishing important partnership for YSJU. I am also a Senior Fellow of the Higher Education Academy.

Guest Editor of Journal of Writing in Creative Practice; Writing Encounters the Self Published December 2010

Journal of adaptation in Film and performance; Paper –  The practice of Adaptation, Projection and Play in  Performance: June 2010

I am also on the editorial board for the Journal of Writing in Creative Practice.

2018 Invited onto the advisory board of the Performing Mountains International Symposium following the role as an advisor across a 2-years period on an AHRC fellowship: Performance Landscapes, University of Leeds.

2017 Co-curator of Queering Ritual an international symposium in partnership with the School of the Arts Institute Chicago and York St John University.

2013 Keynote speaker Presentation entitled Ghost Track at the conference Challenges for the Theatre Artist at the Dramatikkens Hus, Oslo.

2012 Keynote speaker, presentation entitled Kong Lear at Queen Mary, University of London in collaboration with Gary Winters for a conference entitled Monstrosity in the City.

2012 Paper: The Kong Lear Archive. The University of Kent, TaPRA.

2008 Curator of York/NEW YORK a 3-day installation at the international symposium Writing Encounters 2008. Subsequently travelled to the State University of New York, the Neuberger Museum of Art New York, and to the Norwegian Theatre Academy.

For further details about my practice, please visit the webpage: www.garyandclaire.com