Many African countries are flooding, risking decades of development if they do not adapt 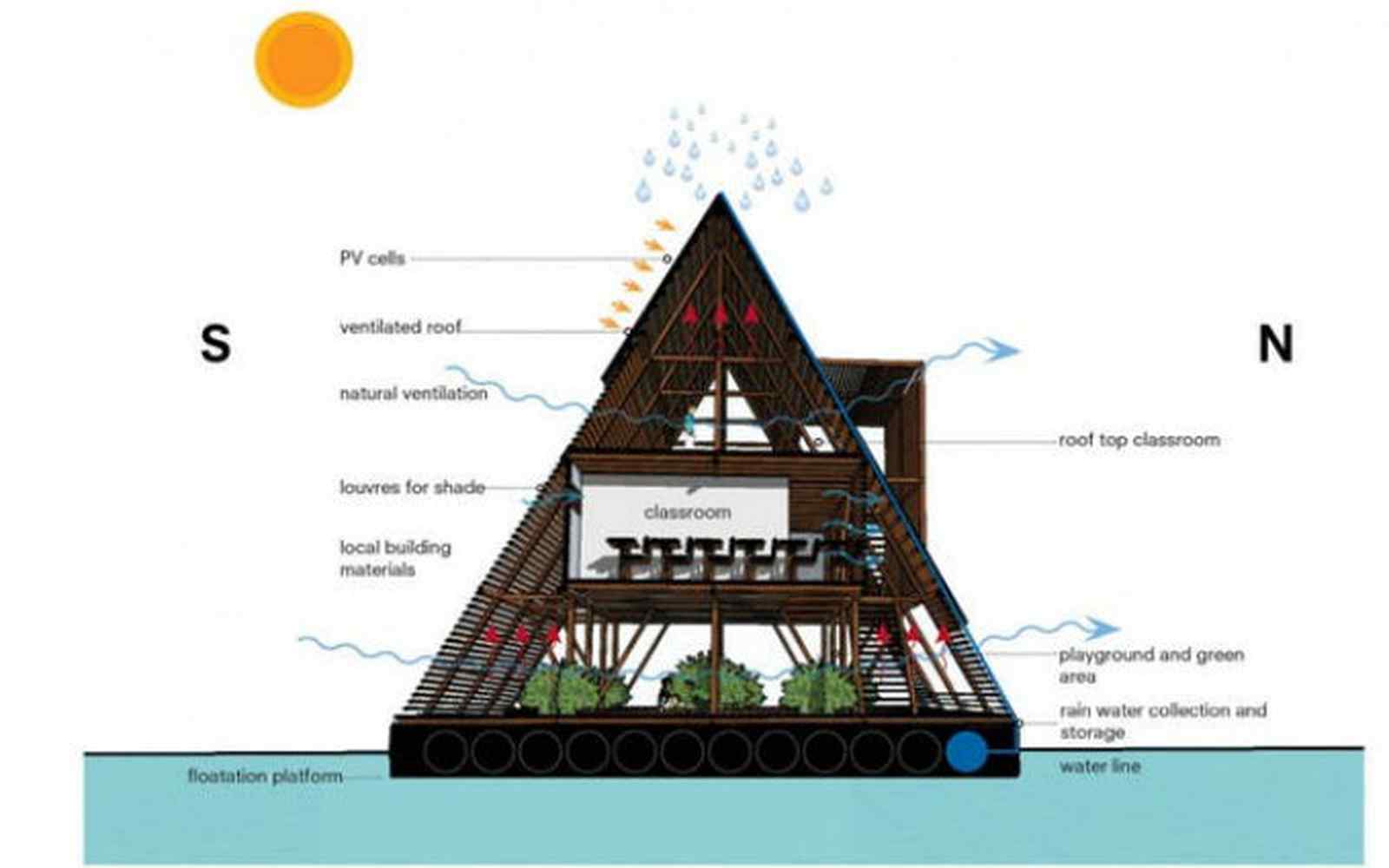 Concept diagram of the Makoko floating school, located in the Lagos Lagoon in Nigeria

Most African countries have made strong progress in achieving major development goals in the last few years. Despite this much needed progress, the past decade has seen flooding damage or destroy much of this same infrastructure, affecting millions and killing hundreds every year. In 2018 alone – up to September 15 – based on conservative estimates, flooding across Sub-Saharan Africa has destroyed more than 10,000 homes and affected more than 2m people.

A heavy price to pay

A recent study suggested that floods cost Tanzania US$2 billion annually. In 2012, Nigeria experienced one of its largest floods in a century, destroying assets worth nearly US$10 billion. In Mozambique, one of the poorest countries in the world, floods in 2013 were estimated to cost over US$500m – nearly 9% of GDP. These figures are significant, especially when considering that this money could have been invested in other developmental goals.

The importance of infrastructure

The simple fact remains that people depend on infrastructure to meet their needs. Without roads, people are not able to sell their goods on the market. School closures disrupt learning for millions of children. Damaged roads and bridges restricts access to health services. The destruction of critical infrastructure such as power and telecommunications leads to untold economic costs. Hectares of destroyed farmland and livestock can be killed. Health emergencies, including cholera outbreaks, can emerge due to poor sanitation and a lack of access to clean water.

These examples highlight the implications of these recent floods for the 17 sustainable development goals (SDGs) set out by the UN.

In Africa, about 3,000 people die daily from diseases linked to poor sanitation, poor hygiene and contaminated water, particularly diarrhoea and malaria. This situation is worsened by flooding, which will make it harder to achieve SDG 6– ensuring access to water and sanitation for all.

In order to lessen the consequences of flooding, African societies must make two major changes.

First is to place greater focus on adaptation strategies, alongside mitigation. Before now, most of the efforts across Africa have been “hard” engineered routes to mitigate flood impacts. This means working against rather than with nature, for instance by building dams or embankments.

However, there is now a general recognition that while floods cannot be entirely prevented, steps can be taken to minimise their impact and speed up recovery. Such a shift in thinking may inspire donor agencies, who provide aid or rehabilitation post-flooding, to consider using the same amounts of money to fund flood adaptation initiatives as well.

For instance, after a recent flood in Nakuru county, just north of Nairobi in Kenya, the EU alone provided €1.5m to help flood victims. Such funds can be channelled towards helping communities adapt to flooding and increase their resilience. This would mean, for instance, factoring in current and likely future flood conditions when constructing or managing new infrastructure.

A particularly good initiative that incorporated such adaptation strategies was the Makoko floating school. The school is a prototype floating structure, built for the historic water community of Makoko, located on the lagoon heart of Nigeria’s largest city, Lagos. As a pilot project, it has taken an innovative approach to address the community’s social and physical needs in view of the impact of climate change and a rapidly urbanising Africa. More efforts should be channelled towards strengthening and scaling up such initiatives.

The second major change is to scale up “soft” non-structural adaptation measures, such as ecosystem-based approaches to flooding. These involve measures which work with the natural flood cycle rather that struggling against it. These solutions include the widening of natural flood plains, planting more trees, protecting and expanding wetlands, and investing in urban green spaces to reduce water run off.

This could be beneficial considering that most African countries do not have sufficient finances to justify the costs of dams and other “hard” engineering. As competing with education and agriculture expenditure priorities is unlikely to end well in such a poor economy, “soft” non-structural adaptation measures may provide a more promising route.

While the increased flooding can be linked to climate change, some of the causes have roots in the destruction of ecosystems. Take, for example, the unprecedented land reclamation projects along the coastal areas of Lagos. The result has been enormous environmental damage because much of what is being drained for housing are coastal wetlands, which are traditionally known for their ability to control flooding.

Policy makers often see flooding as a humanitarian issue only – they must be reminded that there is an economic dimension too. There is evidence that ecosystem-based adaptations are helping people, particularly women and children, adapt to climate variability and reduce their vulnerability to climate impacts.

By adopting an ecosystem-based adaptation, a recent study showed how Thua Thien-Hue Province in Vietnam was able to introduce cleaner urban areas with more opportunities for recreational activities, all the while reducing damage to infrastructure. Less damage to properties means smaller repair costs and an overall safer environment, whereas increases in tourism, or recreation suitability, can lead to better employment and business opportunities.

With the impacts of flooding increasingly being felt across Africa, there is an urgent imperative to adapt infrastructure to flood hazards while fostering sustainable economic development on local, national and regional levels. Without this, all the developmental achievements made so far will be completely undone.