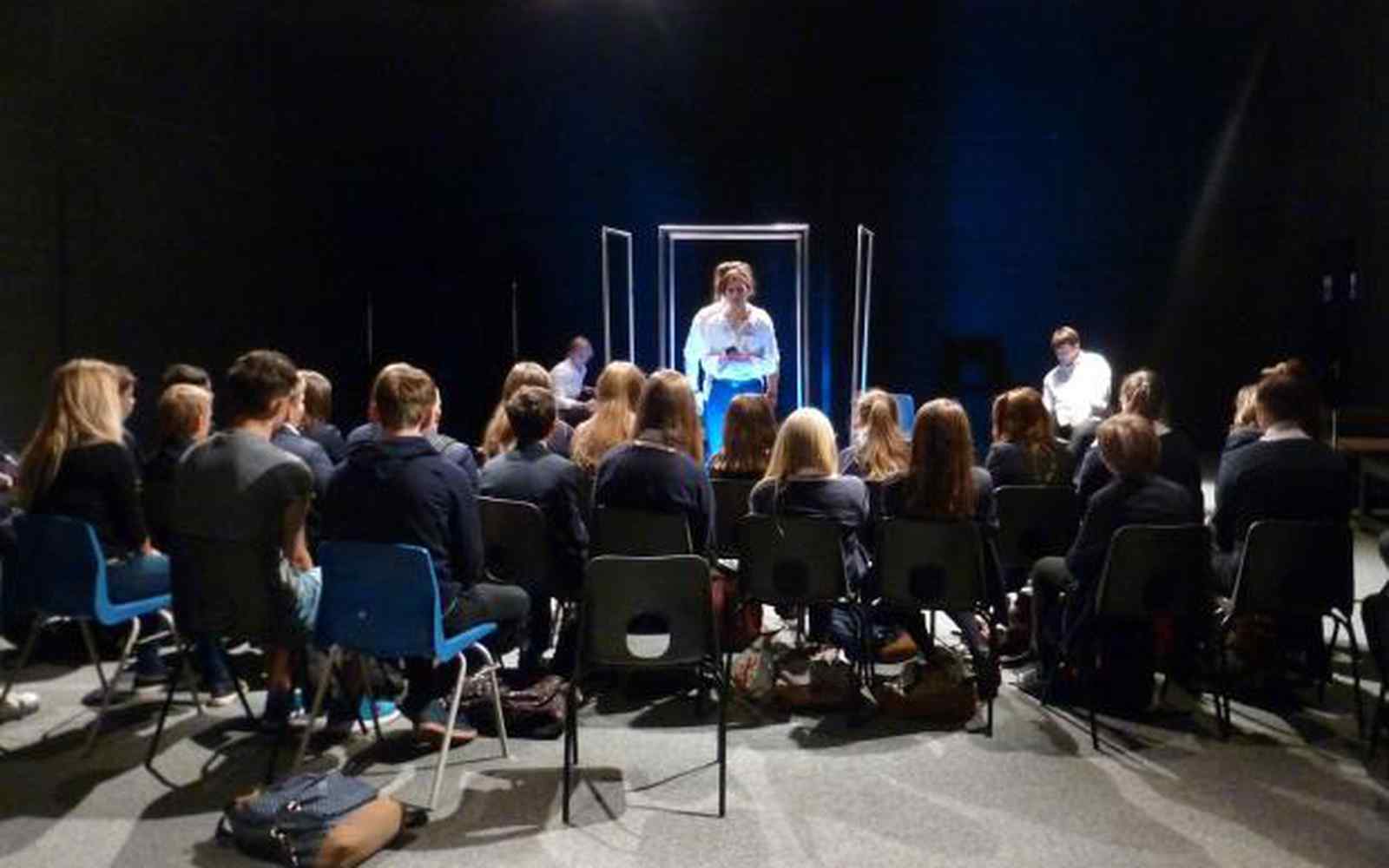 Students watching a performance of 'It's Not OK'

A play and workshop developed by York St John University’s Theatre department raising awareness about child sexual abuse and exploitation, has received praise for the positive impact it has had in schools and with young people and parents in Sheffield, as part of the NSPCC ‘It’s Not OK’ campaign.

The national campaign by the NSPCC highlights the dangers surrounding online grooming, gaming and sexting, and explores the landscape of healthy and unhealthy relationships. The campaign toured the York St John University play and workshop in schools across Sheffield, reaching thousands of year 7 pupils in the city. A closing event for the year-long campaign in Sheffield took place on Wednesday 23 May.

The ‘It’s Not OK’ play offers young people a reflective and participatory opportunity to follow the lives of four characters through their experience of the potential risks associated with child sexual abuse and exploitation. Through a drama workshop, pupils explore the issues raised in the play, giving the characters ‘advice’ and finding strategies to seek support against sexual abuse.

The play was written and created in 2015 by Rachel Conlon and Jules Dorey Richmond, Senior Lecturers in the School of Performance, Media & Production at York St John University. York St John Theatre students and alumni play a key role in the delivery of the play and workshop, through performance and facilitation in close collaboration with the NSPCC and school safeguarding professionals.

The ‘It’s Not Ok’ play was initially commissioned by the City of York Safeguarding Children Board and the NSPCC and delivered to all year 7 pupils in secondary schools within the City of York as part of a citywide ‘It’s Not Ok’ campaign. Following the success of this, the play was performed at the NSPCC’s national conference in London and has been commissioned every year since to deliver the tour and training in South East Wales, Nottingham, Thames Valley and Sheffield. It will continue to be toured in the next academic year throughout the UK.

To date the ‘It’s Not OK’ play has been seen by over 25,000 young people across the country. Rachel Conlon and Jules Dorey Richmond explain the significance of the play and the impact it has had on both the students performing it and the young people who have seen it.

“The positive response from the pupils, teachers and professionals we have worked with has been overwhelming. Young people are learning that sexual abuse is not ok and are finding new ways of speaking out about it.

“For our York St John University students, it has offered an invaluable real world learning opportunity, to deliver high quality professional arts practice nationally within the charity and education sector.”

“The team from York St John University, supported by NSPCC practitioners, have delivered the ‘It’s not OK’ play and workshop to just under 20 secondary schools in Sheffield and the impact has been phenomenal.

“Young people have welcomed the alternative way in which these subject areas have been explored and teachers have talked about how it’s supported their school in tackling difficult issues in a way that’s engaging and powerful. Rachel and Jules’ understanding of safeguarding issues and their ability to marry this with an exceptional creative performance agenda has made it an absolute pleasure to work with them.”

On the back of the success of the play and workshop, York St John University has been commissioned by the NSPCC to translate the play into a national online digital film learning resource. This will be made available to every school in the country via the NSPCC website.