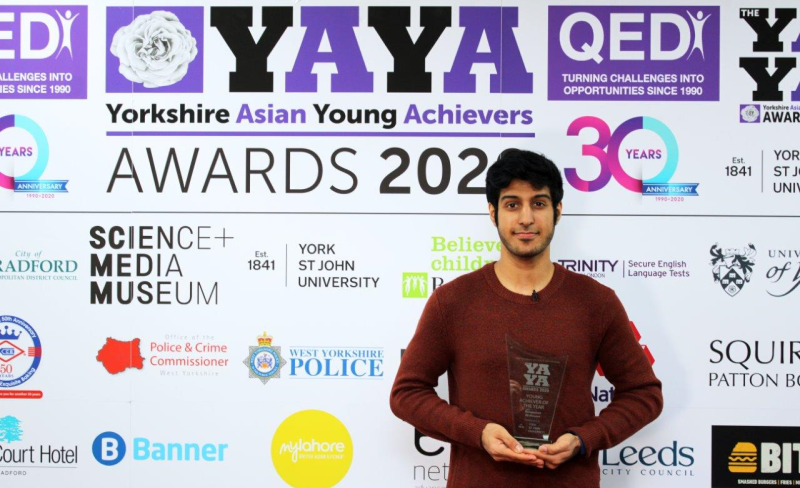 The winners of the very first Yorkshire Asians Young Achievers (YAYA) Awards have been revealed. Sponsored by York St John University, the awards were held to mark the 30th anniversary of Bradford-based QED Foundation, which supports people of every race and faith to achieve their potential.

Open to any young person of South Asian heritage who was born in, lives in or works in Yorkshire, the 13 awards were given to young achievers who have overcome disadvantages, deprivation or traditional barriers to nurture their potential.

Following a huge number of entries from across Yorkshire, winners include a student who went into the care system in Bradford at just 18 months’ old and is now studying to become a physics professor.

The thirteen award categories included achievement in sport, media, education, the arts and creative industries; health, metal health or healthcare; the public sector, the not-for-profit sector, at school or college; overcoming life obstacles, and in business, management, finance or law. There were two awards dedicated to the achievement of young women: as a female entrepreneur and for achievement in a traditionally male work area.

From the high number of applicants, 38 were shortlisted before the judges picked the 13 winners. Drawn from a diverse range of backgrounds, the panel of judges included QED Foundation’s founder Dr Mohammed Ali OBE, York St John’s chief operating officer Rob Hickey and the Head of North for BBC England, Rozina Breen.

The final award of young achiever of the year was meant to be drawn from one of the previous award winners, but this year the judges unanimously decided to award it separately to Mohammed Ali Hussein.

Dr Mohammed Ali OBE said, “Mohammed is a truly remarkable young man who has overcome a very difficult background to become a shining star and someone who, we believe, will go on to do great things in the future.”

After entering the care system when he was 18 months old, Mohammed faced considerable barriers to his education such as the breakdown of foster placements and bullying. By the time he was 17, Mohammed was living independently and achieved 11 GCSEs and 3 A Levels. Mohammed was also the chair of Bradford Children in Care Council (CICC), representing all young people in care and care leavers in Bradford Council. As chair, he spear-headed campaigns, devised and delivered training to students and foster carers to improve the lives of children in care. Mohammed is studying Physics with Astro-Physics at the University of Hull, and plans to go on to study for a PhD in the future before pursuing a career in academia.

There was further inspiration from the winner of the achievement in the not-for-profit sector award, Aasim Khan, who has raised over £300 000 for refugee camps, and founded Darnall Football Academy, where 500 young people now have a safe social space. The joint winners of the achievement as a female entrepreneur award, friends Sanya Rehman and Zahra Mahmood, opened a small market stall in 2010 whilst they were still at school before opening their first shop whilst studying Enterprise at Huddersfield University. Their latest boutique showcasing designer modest clothing will be open soon, and all before their 30th birthdays. The winner of the achievement in the arts and creative industries award, 18 year old Ismail Hussain, a faith inspired singer with a massive social media following has already raised thousands of pounds for people in need, has performed internationally and runs singing workshops for young people.

Professor Karen Bryan OBE, Vice Chancellor of York St John University, said: “We are very proud to be the main sponsor of the first ever YAYAs. These awards resonate so much with the values of our University which has a long history and a strong reputation for identifying, nurturing and celebrating talent from every background and breaking down barriers to help young people succeed.”

To see all the night’s winner’s, visit the YAYA’s website and find out more about the work of the QED Foundation here.