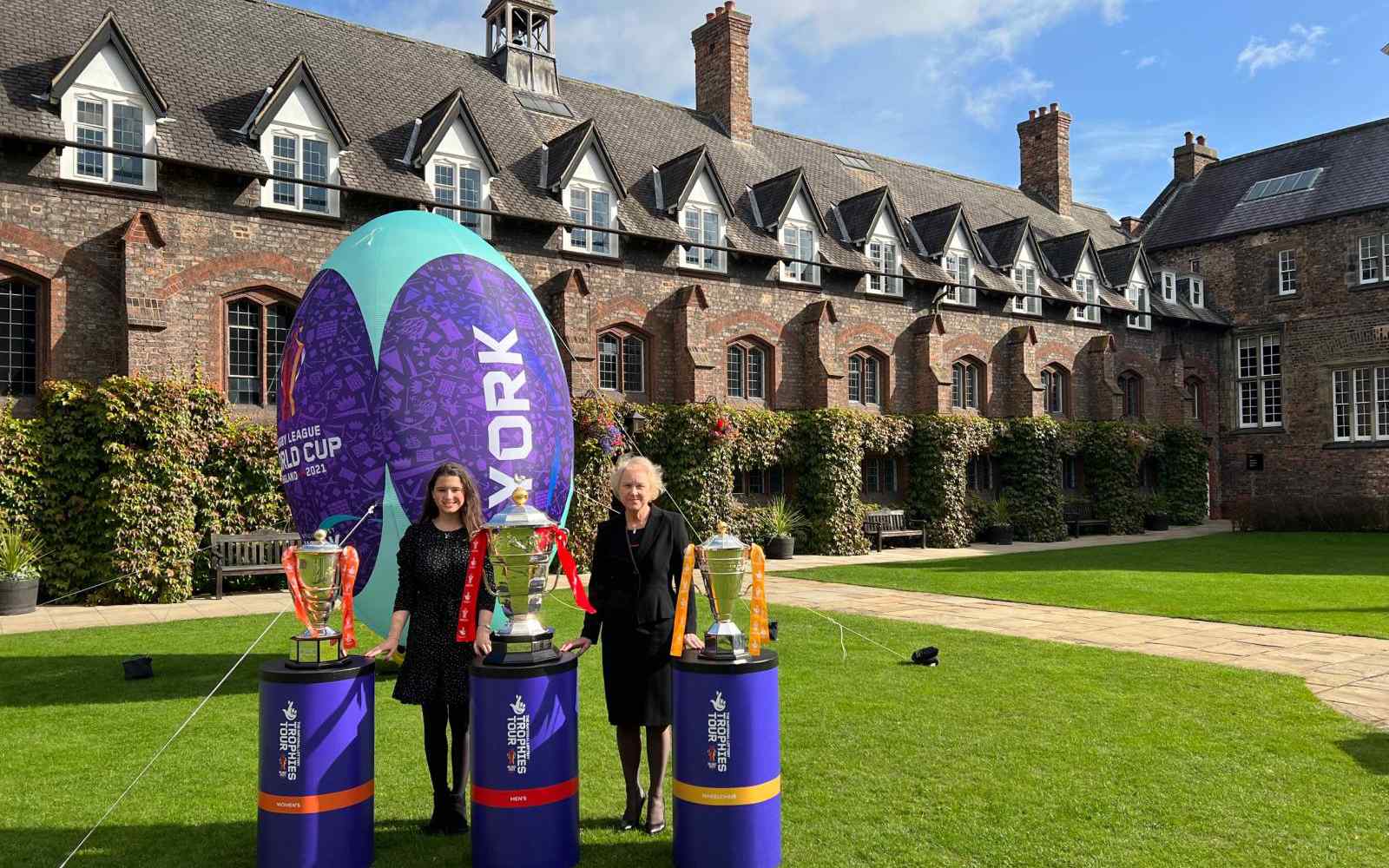 The biggest, best and most inclusive Rugby League World Cup in history is coming to York in just a few weeks’ time, and yesterday marked a celebration of the tournament in the historic city as part of The National Lottery Trophies Tour.

Throughout the day, all three of the men’s, women’s and wheelchair trophies were proudly displayed in four lucky primary schools. Special assemblies were held at Archbishop of York’s Church of England Junior School, Knavesmire Primary, St Lawrence’s Primary and Yearsley Grove Primary, in which students were able to learn more about the world cup games being staged at LNER Community Stadium. There was also a special guest appearance from Rug-bee, the official RLWC2021 mascot.

The tour around the primary schools was co-ordinated by Adam Prentis, Foundation Delivery Manager at the York City Knights, who added his local knowledge to the assemblies and shared his passion for the city with the pupils.

The trophies also made a stop at York St John’s University which is providing a key role during the tournament as an official training venue as well as hosting Rugby League festivals for local schools, colleges and university students.

The LNER Community Stadium will host six women’s group games as well as both women’s semi-finals. The city will also be the team base for New Zealand (Men’s) and Australia, New Zealand, France, Cook Islands (Women’s) teams.

Mick Hogan, Revenue Director for RLWC2021, said: “We are just over a week away now until the tournament kicks off, and it was fantastic to have such a brilliant welcome in York yesterday. There’s lots to look forward to for residents in the coming weeks, with some huge women’s clashes set to take place at the LNER Community Stadium. As momentum continues to grow, we are seeing a real increase in ticket sales, so make sure you act now to secure yours and get ready to watch the world’s best rugby league players in action.”

"From next week, we will be opening up our Sports Park on Haxby Road to welcome school rugby festivals before playing host to the Cook Islands team. Having the trophies on campus today has built a keen sense of excitement for the much anticipated World Cup, and we look forward to welcoming visitors across the city over the coming weeks.”

RLWC2021 will be the most visible rugby league event in history with all 61 games in the men’s, women’s and wheelchair competitions being broadcast live on the BBC.