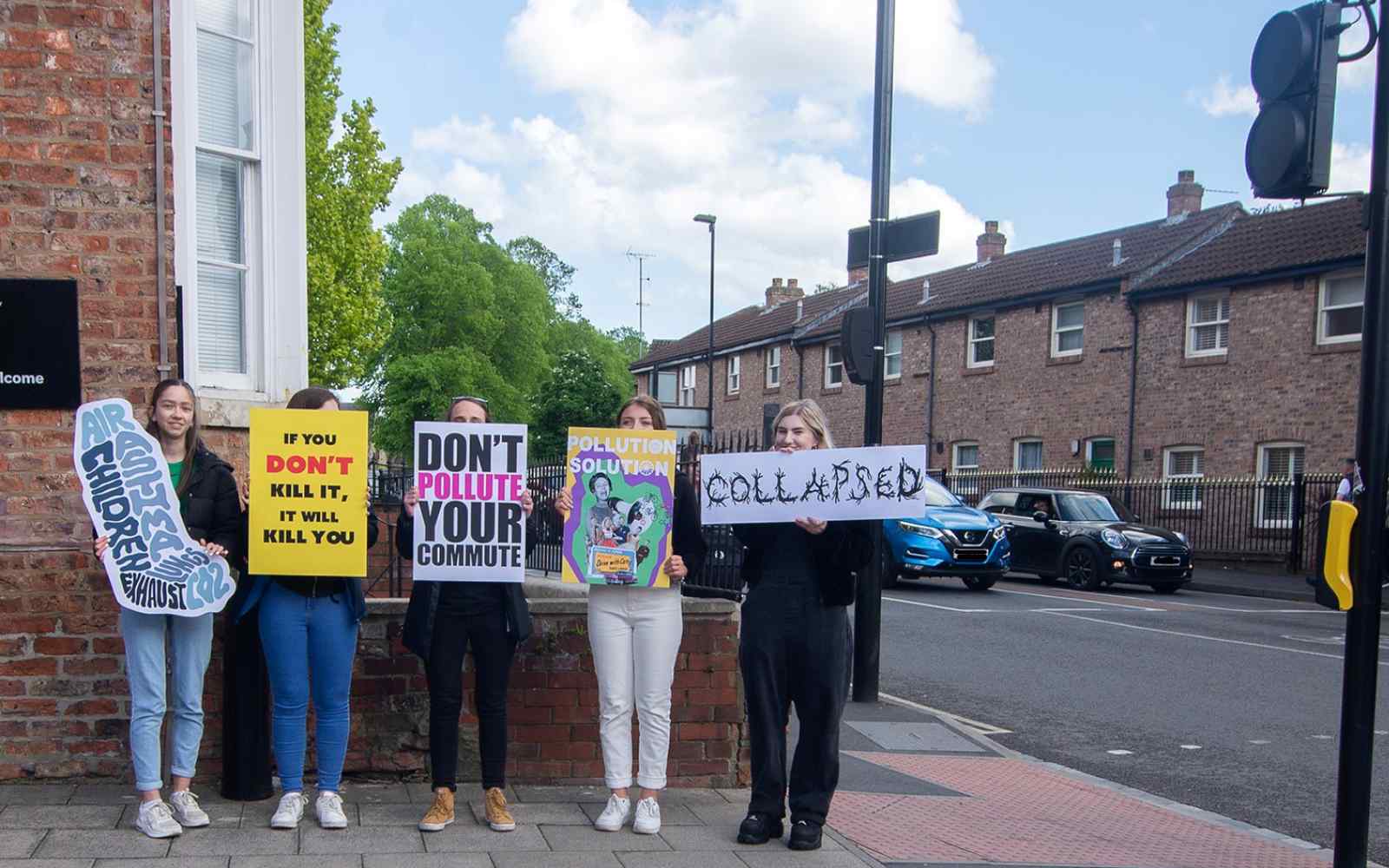 Researchers at York St John University have been working with students to explore the issue of air pollution through a multi-disciplinary project.

‘Living Lab- Learning at the Junction’ invites students to use their campus as a testbed for examining ecological and social issues.

The ongoing project, funded by the University’s Institute for Social Justice and led by the Ecological Justice Research Group (EJRG), has air pollution as its focus. In particular, it investigated the busy and often polluted junction between Gillygate and Lord Mayor's Walk, on the University's own boundary.

Over the course of the semester, over 250 students from nine different academic subjects have brought their subject knowledge and skills to the project, as well as working collaboratively with peers outside of their own discipline.

A major marker in the project’s development this month was The Living Lab Street Festival, part of the worldwide Pint of Science Festival. The unique event saw students, residents and policymakers come together to examine the challenges involved in improving air quality.

Findings from the range of subjects were explored in a series of impactful stalls and performances. For second year drama student Adina, the Living Lab opened her work to the voice of York residents.

Adina said: “I think I’ve always tried to be really conscious of the way I behave and the way it impacts the environment, but before I joined this project it didn’t really hit me how close to home these issues are.

“As part of our research out at the junction, we met a local resident who spoke about respiratory health issues affecting herself and her neighbours. This was really striking.”

Inspired by these findings, Adina was one of a cohort of Drama and Music students who performed self-written compositions and spoken word pieces at the event.

Deputy leader of City of York Council, Cllr Andy D’Agorne, who is also Executive Member for Transport and Leader of the Green Group and was at the event, said: "It was wonderful to see the creative subject-based approaches students took in looking at the issue of local air pollution. The research shared sparked many fruitful and engaging dialogues with the public- something which I hope will continue into future projects.

“I look forward to continuing to work with York St John University and its Living Lab to solve issues collaboratively, and to work together towards a greener York."

Dr Catherine Heinemeyer, Lecturer in Arts and Ecological Justice and the project lead of the Living Lab, said: “We have opened new conversations and strengthened a network that will undoubtedly continue to shape our city. We are so pleased that our students are at the heart of these important dialogues – they have shown they can be agents of change and bring fresh ideas to the table.”

As well as encouraging students to work collaboratively with their wider community, students found innovative solutions by working with peers from other disciplines.

Dr Vicki Pugh, research assistant at York St John University, said: "A major aim of the project was to encourage cross-disciplinary learning experiences between students, to bring new perspectives and conversations to the table.

“It was inspiring to see this collaboration in action, such as performances between music and drama students, and in the scientific understanding which biomedical sciences students shared with arts students to inform their work.”

Keynote speakers included W.H.O. BreatheLife ambassador and founder of the Ella Roberta Family Foundation, Rosamund Kissi-Debrah. Her world changing advocacy began when her daughter, Ella, died in 2013 from asthma. Rosamund’s tenacity for justice led to Ella becoming the first person in the world to have air pollution listed as a cause of death on her death certificate.

Rosamund said: “It is everybody's responsibility; governments, councils, town-planners, decision makers- it's not any one person. We now know so much more- air pollution is linked with many diseases. It is a real public health crisis.”

Prof Alastair Lewis of the University of York explained air pollution’s substantial role in causing illness and mortality both worldwide and in the UK, and the difficult policy decisions which could tackle it.

This is the University’s first ever Living Lab, and researchers will be assessing its merit as a method of learning which encourages students to act as agents of change for issues around ecological justice.

iTravel York and the University’s Estates Department were also part of the collaborative discussions and will continue to work closely with the EJRG to open opportunities for students.

Project findings, as well as inspiring student work from Design and Fine Art students, will be presented as part of the York Festival of Ideas on Wednesday 22 June, at Living Lab: Insights from the Junction.

Dr Heinemeyer concluded: “The connections formed between our students and community throughout this project will have long lasting impact within our University, but also in opening doors to students to get involved in local environmental issues."

Anyone interested to find out more or become involved in the Living Lab, should contact EJRG coordinators Cath Heinemeyer (c.heinemeyer@yorksj.ac.uk) and Jude Parks (j.parks@yorksj.ac.uk).