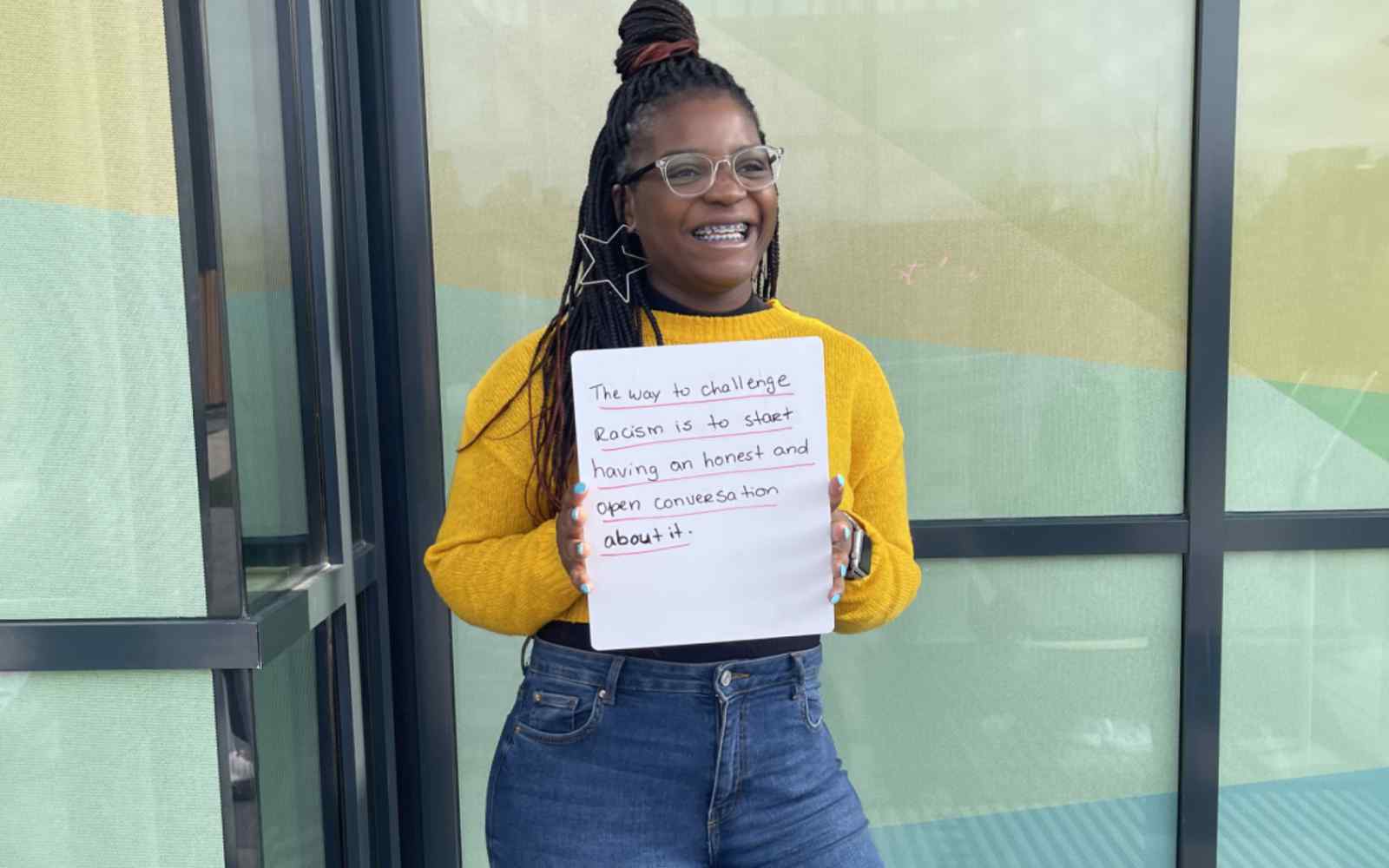 The University issued the following statement on International Day for the Elimination of Racial Discrimination:

Too many individuals, communities and societies still suffer from the injustice and disadvantage that racism causes.  York St John University is working towards becoming an anti-racist university and recognises that there is more to do to ensure true equality of experience for everyone who works and studies with us.  Fighting racism is everyone’s responsibility, every day.

Four Race Equality Student Ambassadors have been appointed. The students are dedicated to engaging their peers in the conversation about race equality and involving students in the University’s application for a Race Equality Charter bronze award.

And, to mark International Day for the Elimination of Racial Discrimination on Monday 21 March, the ambassadors set to work engaging students on campus with a #FightRacism photo campaign. The impactful work invited students to write on public whiteboards in answer to the question, ‘what anti-racism means to you?’ Making the most of social media as a platform, participants then took a photo and shared it on Instagram, tagging @ysjequality #FightRacism

Lydia MacPherson, a history student and Race Equality Student Ambassador at York St John University said: “I enjoyed taking part in the end racism photo competition because it was great to see so many people take part and write on a whiteboard what they felt about racism.

Speaking about why Lydia wanted to become an ambassador, she said: “My history dissertation and modules centre around African American citizenship and equality. Therefore, being able to take part in a group that promotes racial equality and inclusion around campus is something that I am passionate about.

“I hope to be part of creating a more inclusive environment. Our ambassadors raise important awareness that society is still not an equal environment for all races and that this needs to change.”

Fellow ambassador Marcia Costa, studying tourism and events management, said: “I hope to help to increase the engagement around the university and help students to feel comfortable to come forward and talk about any problems or doubts they are having, increasing the feeling that they can have support in whatever matter, even if it's not related to their studies.

“This is important to me because, as a BAME/Mature student, I have been very welcomed to this university and I want to share the same feelings.

“It is always exciting to organise events and engage with fellow students. I hope to bring a positive change by listen to the students and delivering the events that they would like to see on campus.”

They’re also gathering feedback about student experiences and finding out what changes students would like to see on campus.

What is the International Day for the Elimination of Racial Discrimination?

The International Day for the Elimination of Racial Discrimination is observed annually on the day the police in Sharpeville, South Africa, opened fire and killed 69 people, mostly students, at a peaceful demonstration against apartheid pass laws in 1960.

In 1979, the United Nations General Assembly decided that a week of solidarity with the peoples struggling against racism and racial discrimination, beginning on 21 March, would be organized annually across the world.

What else is York St John University doing to tackle racism?

Find out more about our Race Equality Charter work on our Towards Race Equality page and look at the resources on our How to be an anti-racist page.